Like the PFI, Florian Bilic grew up in the small town of Pirmasens in Rhineland-Palatinate. The young Bundestag candidate has been politically involved with the CDU since 2011 and values proximity to the citizens and businesses in the region. On 8 September, he therefore visited the energy park in Pirmasens/Winzeln together with Junge Union, whose chair he took over in 2016. 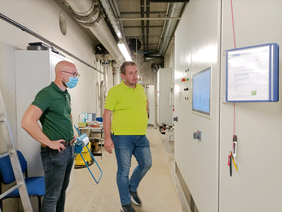 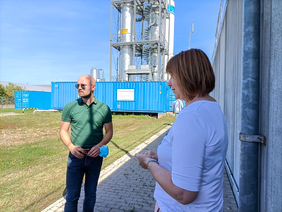 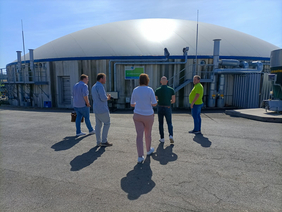 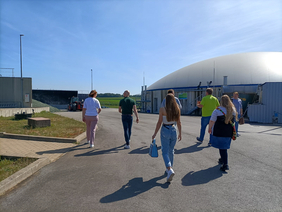 "We are glad that Mr Bilic took the time to visit us despite his busy schedule," explains Dr Kerstin Schulte.  The long-time director of the research institute is also pleased that so many young people (like the members of the Junge Union) are taking a liking to politics.

During a short tour of the energy park's facilities, biotechnology expert Christoph Kaczmarzyk explained the structure and advantages of the plant to the visitors: "With a volume of two times 35 cubic metres, our reactor plant is the largest of its kind in all of Germany. With the ongoing expansion of energies, more electricity will be produced in Winzeln over a longer period of time than is demanded. Currently, up to 2.7 million kilowatt hours of green electricity are produced in our biogas plant and fed into the Stadtwerke grid. That is enough to supply 20.000 households with electricity." In the future, the production of sustainable bio natural gas is to be quadrupled with the help of the planned hydrogen electrolysis.

The topic of sustainability, which has been occupying the scientists here for a long time, was a subject of conversation throughout the afternoon. The members of the Junge Union and the experts from the institute exchanged visions of the future and experiences. "I recognise an impressive amount of know-how here and I am pleased that this is located in Pirmasens. It is important that the political decision-makers are also made aware of this," Bilic concluded towards the end of the visit. "In the best case scenario, I will be able to take the information I have gathered back with me to Berlin. I wish the PFI continued success with its research projects: toi toi toi!"

We wish Florian Bilic much success on his future path and are pleased about his commitment here in Pirmasens.